Many people who wear name badges these days like the convenience and comfort or lanyards. With a lanyard around your neck, you don’t have to worry about pins or magnets, and the badge is easy to put on and take off. Colorful or themed-lanyards are even a way to show your style or show off a logo.

But have you ever wondered about the history of lanyards? Although they have become common as holders for name badges in recent years, lanyards themselves have been around for centuries.

First, let’s look at the word “lanyard.” Its origin is the French word “lanière,” meaning “strap.” The first known lanyards date back to the late 15th century. They were simple cord or rope straps that French sailors and soldiers used to keep a whistle or a pistol handy while they were working or preparing for battle. Since sailors often had to climb the ship’s rigging, the lanyard allowed them to their hands free while keeping tools safe from falling. Some French soldiers continued to wear lanyards with their uniforms through World War II.

Lanyards also have been used for decorative purposes in the military. For example, the colorful braids that many officers often wear at the shoulder of their uniforms to denote rank or honor are lanyards. Some are quite elaborate and contain sophisticated and complicated knots. A white lanyard has formed part of Britain’s Royal Artillery uniform since the end of the 19th century. 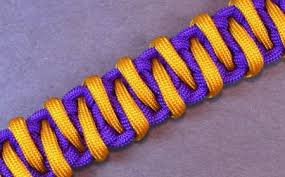 Lanyard weaving, called “scoubidou” in French, became a popular children’s craft in the 1950s in both the U.S. and Europe. Since some lanyards involve intricate knots, making one helps develop manual dexterity. Some of the common knots used in lanyards include the box knot, Chinese knot, triangle, and butterfly knot. The “scoubidou” and its knotting techniques have made a comeback in recent years, and there are many interesting how-to videos on YouTube.

Today, most lanyards are made of nylon, polyester, satin, polyethylene terephthalate (PET), silk, braided paracord, or braided leather. Lanyards often have a plastic or metal clip attached to the end. A clear plastic pouch or sleeve is then attached to the clip to hold a name badge or ID card. In addition to using them to display badges or IDs, many people use lanyards as a convenient way to hold their keys. You might even see the lanyard peeking out of a pants pocket after work instead of around someone’s neck. Students like to use lanyards to keep both their keys and their ID cards handy.

Lanyards also are used to help people keep their electronic devices, such as cellphones, cameras, and USB flash drives, safe from falling or dropping out of a pocket or bag. They are popular convention and trade show giveaways since they can be easily customized with business and event names.

Safety is a common concern when wearing a lanyard – particularly for children or people who operate machinery. That’s why most lanyards have what’s known as a “breakaway” closure. A breakaway closure releases when any pressure is applied to it. This simple safety measure can help prevent choking or other accidents.