If you watch closely in many Civil War movies, you’ll notice soldiers solemnly pinning pieces of paper or fabric to their clothes before a battle. Some marked their uniforms with stencils, and others carved their names into pieces of wood that they wore around their necks.

Despite these efforts, historians estimate that half of the troops lost in the Civil War (1861-1865) were unaccounted for or marked as “unknown.” Of the more than 17,000 soldiers buried in Vicksburg National Cemetery, the largest Union cemetery, nearly 13,000 graves are marked this way.

As the nation grieved, the concept of a military identification disc or metal name tag caught on. 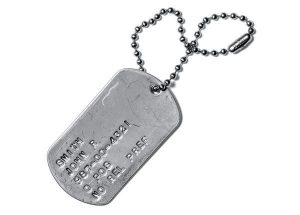 In 1899, Army Chaplain Charles C. Pierce recommended that the U.S. Army uniform include circular identification disks. His plan went into effect seven years later when the Army issued half-dollar-sized metal tags etched with a soldier’s name, rank, company, and regiment or corps. The men wore their tags around their necks on a cord or chain tucked inside their uniforms.

In July 1916, a second disc was suspended from the first one with a short string or chain. The idea was that one tag would remain with the body while the other was removed for record-keeping and burial.

The Navy added I.D. tags a year later as the U.S. entered World War I. The Navy name tags had “U.S.N.” etched on them and included the date of birth and enlistment. The back of the Navy tags also featured an etched print of the sailor’s right index finger on the back as a safeguard against accident or misuse. (The Navy dropped the fingerprint from its tags during World War II.)

The Marines also issued I.D. tags in World War I; these tags were a combination of the Army and Navy styles.

Historians note that I.D. tags weren’t used in the years between the two world wars but were reinstated in May 1941 with one big change – the use of mechanical stamping.

Military I.D. tags are now considered an official part of the uniform. The modern tag is a rounded cornered rectangle made of a nickel-copper alloy that contains a person’s name, rank, service number, blood type, and religion (if desired).

Even though there are more advanced means of identifying a body – such as D.N.A. testing — these so-called dog tags have become part of the culture.

But why are they called “dog tags?” The obvious answer is that the tags look like the metal disks we place on dog collars to identify our pets. Some accounts say the nickname took hold during World War II when draftees complained of being treated like dogs.

Army Historical Foundation records describe newspaper magnate William Randolph Hearst as another possible source. In 1936, in response to a rumor that the newly-formed Social Security Administration was going to distribute personal identification name tags to Americans, Hearst denounced them as “dog tags.”

No matter how the nickname took hold, these military name tags appear to be here to stay.