If you look back over photos of the uniforms fast food employees have had to wear over the years, the word “understated” or “professional” would not come to mind. You’ll see lots of bright oranges and yellows and some unfortunate stripe combinations. And we won’t even get into those paper hats!

The styles were enough to make an employee want to take off their name badge as soon as they punched the clock at the end of their shift.

However, things are changing. According to a McDonald’s survey, more than 70 percent of the restaurant chain’s employees feel that their new uniforms provide a “modern image that they would be proud to wear.” 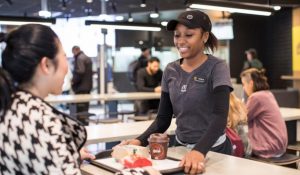 In collaboration with clothing designers Bindu Rivas and Waraire Boswell, McDonald’s USA recently introduced two new uniform collections for its 850,000 employees. The clothing designs were based on feedback from employees.

The biggest change – other than the solid gray and black color palette – is the addition of a versatile denim apron that can be worn as a half-apron or just from the waist down.

The “Waraire” line includes short- and long-sleeve tees that feature a small McDonald’s logo on the front as well as dark blue button-down shirts with red detailing. The Rivas “Timeless Elements” designs have grey tees, ties, and polos with yellow details.

Boswell is known for dressing actors, talk show hosts and professional athletes. However, he once worked at a McDonald’s restaurant in Pasadena, Calif. and said he wanted to create functional designs “that people would feel comfortable wearing outside of work.”

In addition to his experience as a former employee, Boswell worked with focus groups of current crew members to find out what they would to like to wear to work.

Rivas is a British designer who has developed uniforms for other major brands, including the McDonald’s UK line. “Employees are the face of any brand, and when it comes to uniforms, we knew that McDonald’s restaurant employees wanted something that bridges the gap between fashion and function and it was our job to create a unique apparel line that fits the look of McDonald’s while highlighting the individuality of its crew and managers,” Rivas said in a McDonald’s press release.

Although social media users called the new uniforms “dystopian” and compared then to those worn by Star Wars stormtroopers, McDonald’s USA says they are a hit with its workers.

McDonald’s selected WayToBe, Aramark, and Twin Hill as the distributors of the new collections across the country.

McDonald’s franchise owners have some flexibility in the uniforms they choose for their stores. They also have some leeway in the styles for the McDonald’s name badges they choose. While the size, material, and color of the badges may vary, the badges all feature McDonald’s iconic golden arches. The logo, which has changed several times since it was first introduced in 1952, is one of the most recognizable in the world.